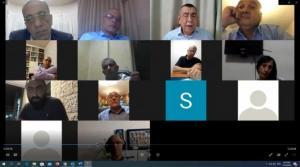 Ramallah 13 May, 2020- Ahead of the Palestinian meeting leadership to discuss and announce the Palestinian response to the Israeli annexation plan, Horizon Center in cooperation with Wattan News Network held A webinar on May 13 to discuss this issue and provide recommendations to the decision makers. The participants included Fatah Central Committee member Dr. Nasser al Kidwa and the Secretary General of Palestinian Affairs in the Arab League Dr. Said Abu Ali in addition to a dozen of experts and political activists. They discussed the political, legal, economic and security implications of the Israeli annexation plan. More than a dozen activists and experts including academics, members of professional syndicates and political activists participated in the discussion which was concluded with the following key recommendations to decision makers

* To adhere to two state solution and to uphold the Palestinian national goal on this basis. This national goal despite all obstacles and hurdles remains the only viable option to peacefully resolve the Israeli Palestinian conflict once / when enough political will and resolve are secured to implement it. This solution is widely acknowledged and established in international law, regional and international political circles. In addition, despite all hurdles and failures, the mainstream of Israeli and Palestinian peoples continue to support the two-state solution although prospects of achieving it in the short and medium terms are slim.

* To dismiss the possibility of sliding into the unrealistic one state solution. This goal is misleading, evasive and does not establish the two national identities of the conflict parties. This so called one state solution is no more than than a diversion and a virtual political pursuit that will inevitably lead to wasting theaccumulative political and legal accomplishments that was built over decades towards two state solution.

* To work on holding general elections despite the political, technical and other complications. It is important to start working on reviving sectarian elections at all levels including for PLO and PA institutions. The renewal of the democratic process of electing national leaders and institutions is an imperative to keep the national pursuit for a peaceful resolution to the conflict on the basis of two state solution.
* To find a new approach to hold national reconciliation while focusing on the minimal common political platform unifying all Palestinian political parties. The political unification of the Palestinian political establishment is a crucial element in building statehood institutions and pursuit of the two-state solution. To achieve this, disputes related to governance in the Gaza strip which impeded the process so far, should be put off while the focus is placed on unification of political establishment on a common political platform.