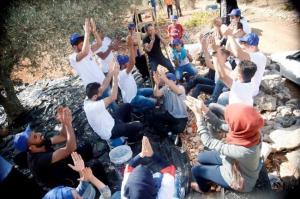 In a small village south-west of Bethlehem, Jamal Safi lives with his wife, Nawal, and their four sons. Jamal is the primary breadwinner for the family and works as a teacher.  Nawal recently resigned from her job to dedicate more time to taking care of her family and land.
The family along with other residents of Nahalin as well as local and international volunteers and the European Union Representative picked olives during the "Hand-in-Hand" event, organized by the European Union and the Palestinian Union of Agricultural Work Committees.
Their life hasn’t been easy. They have faced many difficulties in accessing their land. Since no paved road leads to their land, Jamal must walk few kilometers every time he enters and leaves. As a result, the family barely went. "Going to the land was very difficult and exhausting, especially in the olive harvest season. We had to walk a long way while carrying heavy equipment. At the end of the day, we returned not only with the equipment but the harvested olives as well.” Jamal said, "The land was pretty much neglected. We only went when it was necessary”.
In 2015, the Union of Agricultural Work Committees (UAWC)  started implementing the Juthoor -”Roots” in English - project, which is funded by the EU. The project’s main aim is to assist Palestinians in activities relating to road restoration, land reclamation and water facility construction. Nahalin was chosen as one of the 22 villages benefiting from this project. Nahalin continuously face challenges relating to their properties as a result of the surrounding settlements and continued settlement expansion. 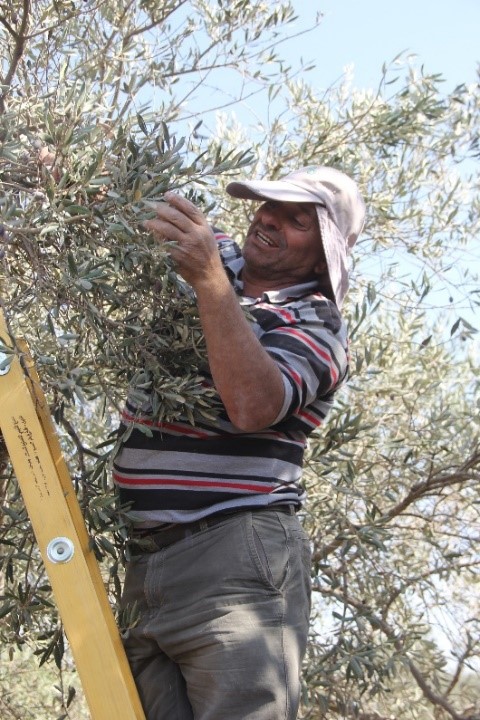 
Safi family has benefited from restoring a road in the village that leads to their land. The family is now happily able to go almost daily to their land to take care of it and to spend their leisure time. Jamal expressed his happiness by saying, "Since restoring the road, I have visited my land almost every day, carrying fertilizer and equipment to work and plow on the land”. Adding to that: “Finishing the construction of the road means we have a way to travel more efficiently and have an increase in financial returns since increased time on the land increases its productivity.”
Manal was hardly visiting the land. "Going to the land was a burden. The road is bumpy and long. I cannot describe my joy because now I can come anytime,” Nawal said with a big smile, "Even our friends and relatives are coming to the land to have fun and barbeques. This road literally revived our land.” 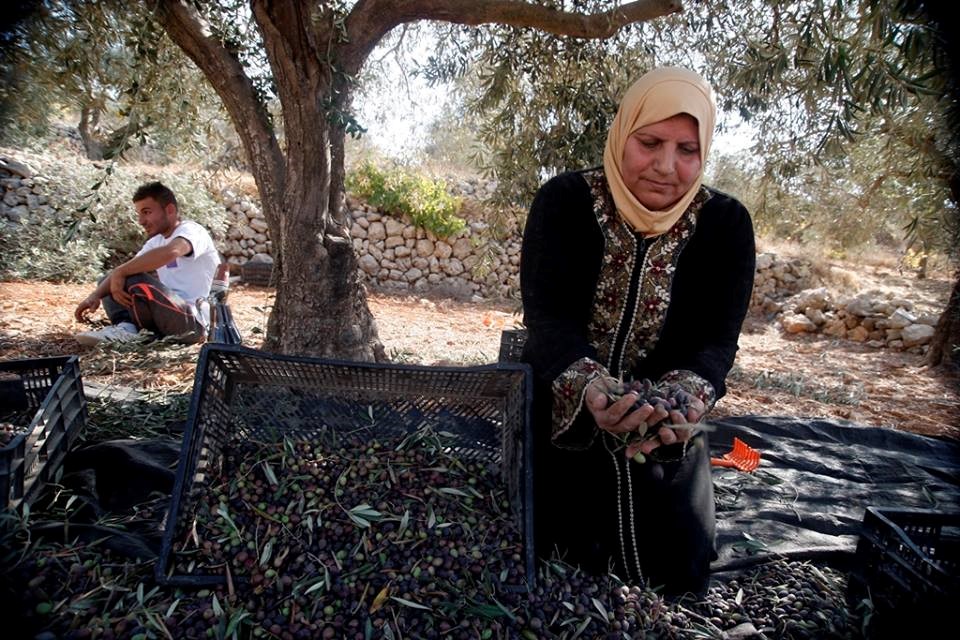 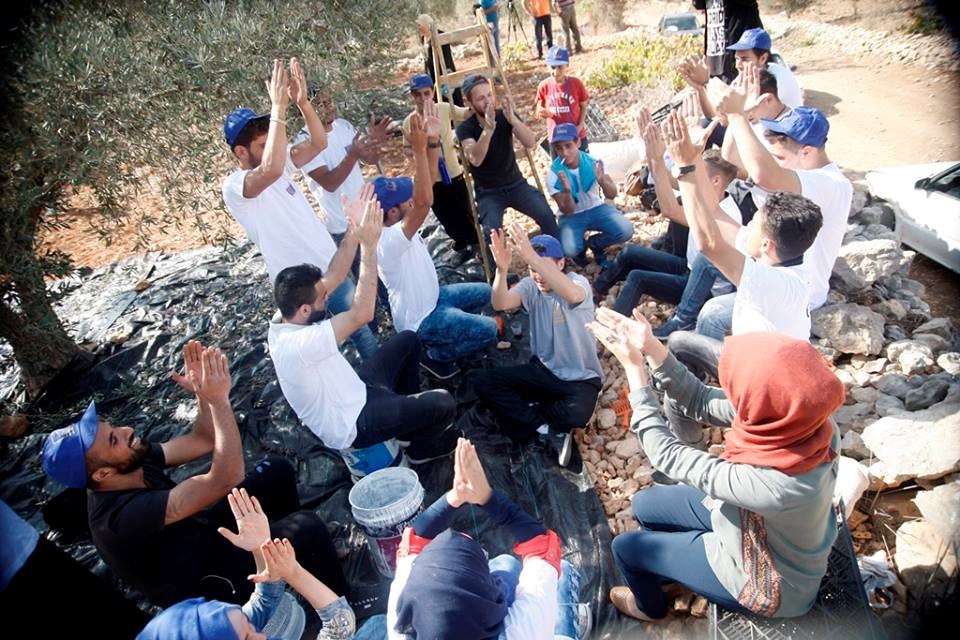 Safi family is among hundreds of beneficiaries in the Palestinian villages in Area C. By the end of the second phase of the Roots project, 1200 dunums (1.2 Square Kilometers -km2) will be rehabilitated, roads with 70 Kilometer length will be constructed and restored to assess the citizens' access to their agricultural lands.  In addition to that, many other agricultural activities will take place such as building a water dam, protecting pastoral water springs and organizing workshops for farmers. According to Grace Ódeh, the Project Director of Juthoor, "70 wells were reconstructed in the village of Nahalin, which can provide a permanent source of water for farmers who have been suffering from the lack of water or irrigation systems because of the close proximity to the settlements and being located in Area C.” These wells have indeed helped ease the economic burdens on the farmers. Before, they were forced to buy water and pay nearly 600 shekels (140 Euro) a year. This also limited the types of crop varieties they could cultivate and staggered the growth.
Mohamad Safi, an agricultural engineer from Nahalin, was picking olives during the event. He explained the importance of Juthoor project: "Since the beginning of Juthoor project and opening the agricultural roads that facilitate the farmers’ access to their lands, the resident of the Nahalin have increased the care they provide for their land. This will then increase the likelihood the remaining lands in the area will be developed, which will contribute in protecting it from being confiscated for the expanding settlements. Empowering the farmers in their lands will limit the settlers’ thinking to take the lands.” 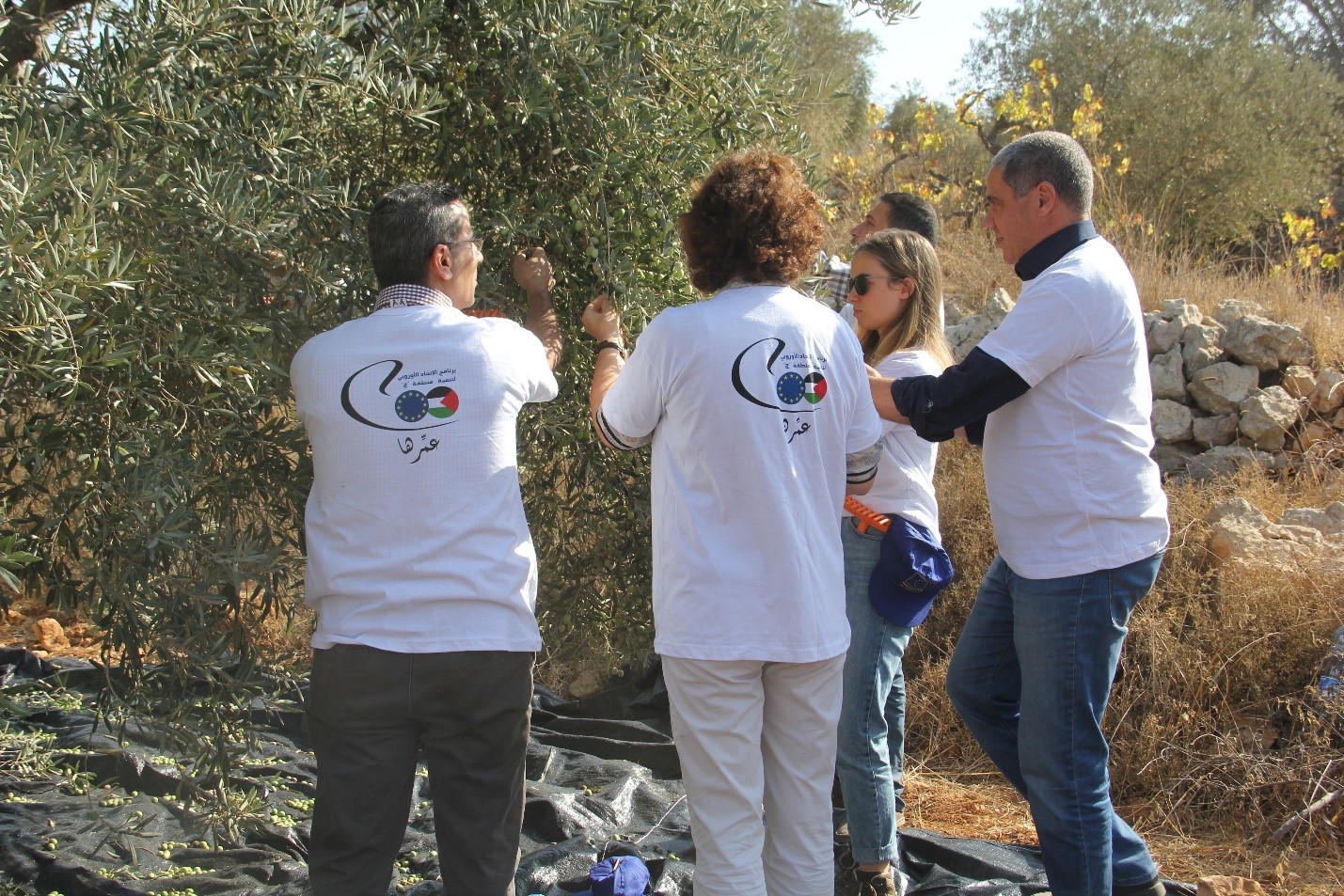 The EU Representative, Ralph Tarraf, and his family join dozens of volunteers in picking olives with the residents of Nahalin village, October 2016.

During the “Hand-in-Hand” event organized by the European Union, dozens of young adults and international volunteers helped the family with the olive harvest. Nawal shared her happiness: "We usually enjoy harvesting olives, but today the atmosphere is different and special." Jamal added, “These activities are important to deepen the relationship the youth have with the land. I believe that the whole issue in this area is about having our free land and living in peace!" 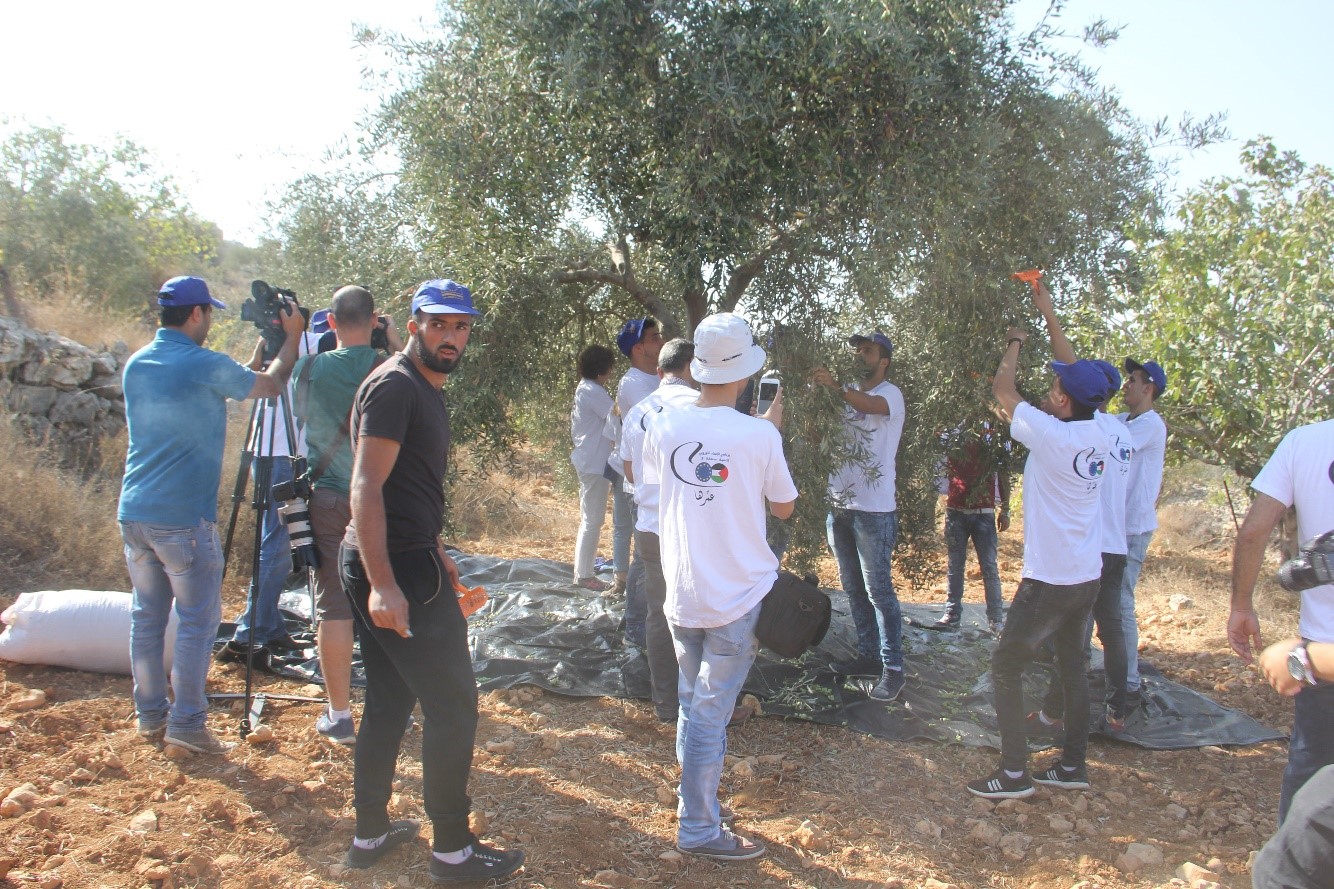 Voulunteers are picking olive with the residents of Nahalin during “hand in Hand” activity. October 2016.