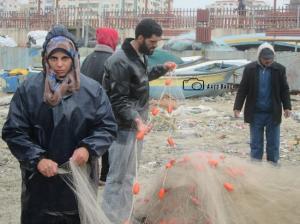 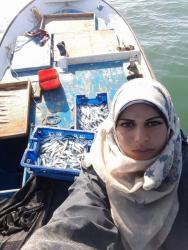 Since a very young age, Madeleine Kallab has been spending most of her time in the sea with her father. He is a fisherman in Gaza. He raised her practically in the sea with the other fishermen.

Since Madeleine was six, she would go everyday with her father to the sea and help with him fish. When she turned thirteen, she had to suddenly face the sea alone as her father became ill.

Like the other fishers, Madeleine leaves her house everyday at 4:00 AM and returns at 7:00 AM. Sometimes, she also goes out during the night from 6:00 PM to 12:00 AM. During the rest of her time, she sells fish, and gives locals tours of the sea in her boat, charging them about 30 Shekels (~7 USD) per person. In addition to all that she studies at the nearby college.

Raised among the fishers and hunting nets

“I grew up among the fishermen. I’ve been with them everyday since I was a little girl,” Madeleine told WATTAN. “Despite the fact that I’m the only woman working in fishing in Gaza, I have not encountered any societal issues with the fisherman or anyone else for that matter. The fishermen treat me like their sister, and my relatives are used to my work as a fisher.”

Madeleine thoroughly enjoys her work; however, she still has some hurdles to overcome: “For instance, I can’t get married with this lifestyle—I spend a lot of time on the sea. At the same time, I can’t quit this job, as my parents and three brothers depend on me financially,” Madeleine said. She added “I’m looking forward to graduating from college and finding a job, so I can also focus on my personal life.”

Her Ambition linked to her job: to open a small fishery

Madeleine is studying for a Diploma in Secretarial and Business Administration at “Beit Al Maqdes” college in Gaza. At the same time, she is also considering to open her own fish shop. “I’m thinking about opening my own fishery. Many of my customers trust me. I have never cheated them, as some fishermen are known to do.”

“The problem is that this project is too expensive. I thought of taking a loan from the bank, but I have already taken a loan to pay for my private tour boat, which I’m still paying for.” Additionally, she spoke of the bad fishing season, as “for the third consecutive year, the season has not been as plentiful as it was before, and that’s why I had to buy the boat for tourists. But even now, trips to the sea for tourists are very rare, even after the summer break.”

The Israeli forces confiscated my nets

The Israeli forces are harassing Madeleine and other fishers in Gaza by arbitrarily shooting at them and at their boats, confiscating nets and preventing them to fish. A few months ago, the Israeli navy attacked Madeleine and confiscated her nets.

Throughout her interview with Wattan, Madeleine kept describing the sea and talking about her love for it, "The sea is my second home and my life. I spend all my time there. I grew up on it, and I earn my money from it. I often speak with the sea and the waves. I like to come to the sea without the fisher’s leather uniform. It makes me feel like a kid that just got to a candy shop.''

Madeleine concluded her speech by recalling: “when I was in kindergarten, the school searched for me for two days to give me my graduation certificate. They finally found me at the sea with my father, so instead they handed it to me there”.