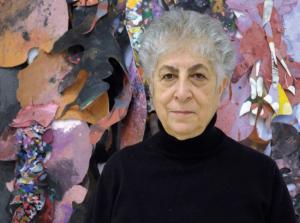 There are ten days left to see an exhibit of contemporary Middle East and North African art at the Guggenheim Museum, titled, “But a Storm is Blowing from Paradise.” Mariam C. Said saw the show during the summer and then attended a special briefing on the art. She sent us the following account. –Mondoweiss Editor.

I went with a friend to the Exhibition at the Guggenheim of Middle Eastern and North African art and found something beguiling and disturbing.

The title of the exhibit is: “But a Storm is Blowing from Paradise.” That is a comment Walter Benjamin made about a Paul Klee work, “Angelus Novus”, now in the Israeli National Museum. In Benjamin’s view, the “angel of history” is looking back towards the past.

Where we perceive a chain of events, he sees one single catastrophe which keeps piling wreckage upon wreckage and hurls it in front of his feet. The angel would like to stay, awaken the dead, and make whole what has been smashed. But a storm is blowing from Paradise.

At the Guggenheim exhibit there was an announcement of a one-on-one debriefing on Palestinian art before 1948. The one-on-one debriefing it seems is a project of Public Movement, which was founded by Alhena Katsof, a curator in New York, and Dana Yahalomi, an Israeli, at Artport in Tel Aviv.

The debriefing “agents” are: Hagar Ophir, Amir Farjoun, Ruth Patir. Why does the museum have this heavily Israeli team doing a Debriefing about Palestinian art pre-1948? I wonder.

My friend and I decided to do this expensive debriefing, at $25 for half an hour. My friend signed us up for this event. You sign on line. My friend got the below response after she signed for both of us

Dear —— ——-,
The performance takes place at a secret location within the museum. To ensure a timely entry, we recommend arriving at least 5 minutes prior to your scheduled performance time. If you are running late on the day of your session, please call the Membership desk at 212 360 4358.

Upon arrival at the museum you must check in at the Membership Desk and await further instructions from the museum staff. Documentation of any kind is not permitted during the performance.

I arrived five minutes early, waited for a security guard to pick me up and take me to the secret location at the museum. The first thing he did was ask me to totally shut off my phone for security reasons. We walked through the back of the exhibition areas and zigzagged until we got to an elevator. Up the elevator and into a conference room where a young man, to me obviously an Israeli from his accent, welcomed me. He does not introduce himself nor does he ask me to introduce myself. My debriefer, I surmised, was Amir Farjoun, because the other two are females. I presumed he had my name because the box office asked for my name. I sensed he was a bit nervous, or it could be my imagination.

For half an hour this young man excuse my French bullshitted about Art in Palestine before 1948. That is my opinion. He jumped from one thing to the other after informing me that the museum in Tel Aviv before 1948 encouraged Palestinian artists. He mentioned normalization, Boycott, Divestment and Sanctions, and proceeded to drop names of Palestinians involved in the Art world like Kamal Boullata, who wrote a book on the history of Palestinian Art, and Gannit Ankori, an Israeli who wrote another book on the subject based on Boullata’s work. They knew each other and ultimately had a falling out and she sued Boullata. That last piece of information he did not mention, but I mention it to you to give you the background. He simply dropped their names (Boullata and Ankori) and the name of Ariella Azoulay who is working on photography pre 1948 to bring out the coexistence aspect before 1948.

He also mentioned Samia Halaby, the first Palestinian artist to be exhibited at the Guggenheim (incidentally her work was donated by a Jewish person) and seemed to dispute the fact that she was a first for the Guggenheim. He spoke of a project of the Tel Aviv Museum that was founded early on in the Zionist project where art was to be used for political purposes. He mentioned that Peggy Guggenheim supported that museum. I sensed that what he was trying to say is that all the artists at that museum at that time who were Palestinians were part of the museum’s mission at that time. What narrative he was spinning I could not tell. I remained silent.

Then he implied that Palestinian art before 1948 was looted and implied that Daoud Zalatimo illegally spirited his work to East Jerusalem. He talked about the artist and writer Jabra Ibrahim Jabra and then showed me three paintings on his cell phone, including a self portrait by Sophie Halaby and a painting by Jabra done prior to 1948. He also talked about his museum, the one in Tel Aviv– Tel Aviv Museum– trying to locate the art that was looted. As if the work of the Palestinian artists who studied art at that time in Tel Aviv at that museum belonged to the museum and not to them personally. As if to imply that the Palestinian artists looted the art work that belonged to the Jews who owned the museum. In other words, the same way the Germans looted the art of European Jews.

I thought, that is interesting: the Arab artists looted their work because everything prior to 1948 belonged to the Zionist project!

He added that there was looting of books and manuscripts. He did not know that I knew that it was the Zionists who took these books. Then he added something about private collections. As he talked he would write down a subject– museums, history of art, etc– trying to give the impression that his debriefing was historically true and logical. He also mentioned going to Darat al Founoun in Amman and seeing a 1948 artwork of Palestinians hoisting a white flag as they retreated from Lydda (as I remember) titled Hope and added it should be titled Shame.

I said, “But where is the work of the Palestinian artists before 1948?” No video or slides or any visual piece of art was shown except the three pieces on his cell phone.

I left feeling that I had been taken on a ride. Since then I have been asking myself what all this is about.

I began to think this is a new heist to get Israel into the Middle East art scene since the Israelis have been marginalized by the emergence of so much interesting Art from the Arab world. Or maybe it is an effort by the Guggenheim management to satisfy the board and donors that they are not in cahoots with Boycott, Divestment and Sanctions and that they have an Israeli component represented at this exhibit. This is what went through my mind. I thought of writing a letter to the Guggenheim board but then I thought it better to let people know.

Here is further information on the exhibit.

There is only one Israeli work in the show. It is by Ori Gersht, born in Tel Aviv, now living in Berlin, called Evaders. It is on two video screens and the only words uttered are the full Walter Benjamin comment on the Klee picture. On one screen is a man’s face and shoulders as if heading into the wind on foot constantly walking. On the other screen you see him from the back in different seasons walking in difficult mountain terrain. There is 15 minutes of this. It is about Jews trying to escape Vichy France into Spain across the Pyrenees, which Walter Benjamin did before he committed suicide because Spanish authorities held him with other refugees and said they would return them to France.

Ala Yunis’s “Plan for Greater Baghdad” is worth looking at carefully. This was the title of Frank Lloyd Wright’s project to build a stadium in Baghdad. But his stadium was never built. The work is composed of a wall of framed photographs, documents, maps, architectural plans, postage stamps, etc from the assassination of King Faisal to the present….all tied to the the building of the stadium. Underneath in small type runs a narrative of the trials and tribulations of the many architects and their plans for this stadium – starting, stopping, and changing according to the rise and fall of the various leaders of Iraq. It is a witty look at the history, in parts laugh out loud funny and bizarre.

Other works from the Arab world, one from Iran and one from Turkey, are quite good too. There are no Palestinian artists in this exhibit. On the one hand this could indicate that the Palestinians did not accept exhibiting because of BDS; but I doubt this is true. The Guggenheim is an American institution; no artist will say no to exhibiting in such an important space. The Israeli artist lives in exile.

But why a secret debriefing by Israelis about Palestinian work not in the show– that remains a mystery.

I did write Samia Halaby and Emilie Jacir, two well known Palestinian artists whose work is at the Guggenheim. Emilie won the Hugo Boss prize and had a huge exhibit there. Samia provided interesting information which I will share with you.

“Clearly they have become threatened by the international success of Palestinian art and artists. My 50-page essay on Palestinian art in Jerusalem during the first half of the 20th century in Lena Jayyusi’s tome titled “Jerusalem Interrupted” has gotten their attention and is disturbing them. This makes me happy. A vibrant cultural scene in Palestine while the British were arming and preparing Zionists to occupy the 1948 parts is a truth Israel needs to hide. Also that the de-briefer needed to dispute me as the first Palestinian artist in at the Guggenheim collection is a compliment to me. Consider that the first painting by a Palestinian given to the Guggenheim, my painting, was given by a Jew. That might be a detail they took note of. All very disturbing to them.”

Source: This article was published in Mondoweiss on September 27, 2016