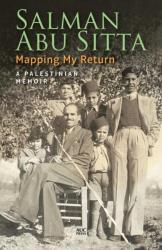 Given the centrality of memory and history to modern Palestinian identity, it is fitting that the number of memoirs and diaries being published by Palestinians seems to be on the rise.

In recent years two subgenres of Palestinian autobiography and memoir have emerged. First are accounts by diarists such as Wasif Jawhariyyeh, Anbara Salam Khalidi, Sami Amr and Ihsan Turjman, born in the late 19th and early 20th centuries, who witnessed the First World War and British Mandate rule in Palestine, and experienced the Nakba — the mass displacement of Palestinians during the founding of the State of Israel — as adults.

Secondly, there are memoirs of those who were children or young adults when the Nakba occurred. Coming from figures such as Shafiq al-Hout, Mourid Barghouti, Ghada Karmi, Yusif Sayigh and now Salman Abu Sitta, these are often written with a more explicit purpose — memoirs of lives as exiles and refugees fighting for Palestinian rights, rather than diaries kept for personal use.

These common themes are also to be found in Mapping My Return. The trauma of war and refugee life, political lives of constant struggle (with Israel, but also often with Yasser Arafat) and fierce love for their homeland and especially the towns and cities — Jerusalem, Deir Ghassaneh, Hebron — in which they were born and raised.

Almost all of the mentioned memoirists hail from Jerusalem, northern Palestine and the Galilee. This is where Abu Sitta differs, for his autobiography gives a unique insight not only into refugee life and Palestinian politics throughout the decades, but into how he, as a Bedouin Palestinian from the southern Naqab desert, experienced the Nakba and its aftermath.

Unlike Jawhariyyeh, al-Hout or Sayigh, Galilean hills, Lebanon and Jerusalem do not loom large in Abu Sitta’s account. Instead, his life story is rooted in the vast, fertile plains of the southwestern Naqab, and the bayt al-sha’er (literally “house of hair” or tent) in which his mother lived. The family’s fields were plowed by camel and many of the men and women who came to work on the harvest were from Egypt’s Sinai peninsula.

Rather than flee north into Lebanon or east towards Jordan, his escape from the Zionist forces who destroyed his childhood home was to Khan Younis near the border between Gaza and Egypt, ultimately attending school and university in Cairo.

As the son of a paramount chief of the Tarabin Bedouin, whose influence stretched from Cairo to Bir al-Saba, Abu Sitta frankly admits that his tale is not one of “the most tragic, painful or traumatic fates of the hundreds of thousands of Palestinians made refugees.”

His elite background and family connections cushioned him from the grinding poverty which hundreds of thousands of refugees in Gaza faced.

But the trauma of the nighttime attack on his father’s home in the village of al-Ma’in, the destruction and theft of its fields and the sight of Israeli massacres in Gaza started off his “life’s mission … to try to put a face to this invisible enemy.”

Although Abu Sitta forged a career as an acclaimed engineer, he also became a historian of Palestine, meticulously documenting the villages, shrines, homesteads and traditions which Israeli laws, bulldozers and museums have sought to eradicate or appropriate.

Abu Sitta’s childhood reminiscences evoke a time when Palestine was undergoing rapid change. His grandfathers and uncles lived in constant tension with the Ottoman Empire, sometimes going into hiding in Jordan. Even so, they fought on the Ottoman side in the First World War, against British forces invading Palestine from the south.

Abu Sitta’s father had to adapt to change under the British Mandate. He opened the area’s first school in 1920 — some of the students, already regarded as men at 16, arrived to class wearing swords — and introduced new plant strains from the agricultural college at Tulkarm, where Abu Sitta’s older brother was studying.

The contradictions in Palestinian life at this time are encapsulated in Abu Sitta’s observations on the education he received, in which “the British Mandate saw fit to impose Roman history and Latin on the Arab students’ curricula at the expense of Arab and Palestinian history.”

Despite this, Abu Sitta felt that “hearing such names as Shakespeare, Julius Caesar and Dante enriched my early years of education … But perhaps it was not so strange. After all, Palestine had more and longer-running cultural, political and commercial links with Rome (and Greece) than England.”

”The real source of our history”

The story of Abu Sitta’s community highlights Gaza’s historical connections to Egypt. Family members supported the 1879-82 Urabi rebellion, in which Egyptian officers tried to declare independence but were defeated by a British invasion.

In later years, Abu Sitta’s research found traces of his family’s significance not only in oral histories, but in the travel accounts of European orientalists who visited the region, such as Alois Musil and Victor Guérin.

Despite the value attached by Western culture to these written tales, Abu Sitta asserts that they just made him more “confident that, in the end, it is those storytellers at the shigg [a place where men met to drink coffee] who are the real source of our history.”

As an adult, Abu Sitta became a successful engineer and urban planner, working and teaching around the world.

These later sections of his memoir derive additional interest from his narrative style, in which he tells the tales of friends and relatives. In doing so he highlights the diversity — and often the anguish — of refugee existence, and lifts the message of the book beyond that of one man’s story.

This is a highly readable book, much recommended to anyone with an interest in Palestinian history. More than that, it is a significant piece of documentation, recounting events and ways of life which have largely been forgotten or erased. As the generations who experienced the Nakba for themselves are slowly lost, writings of this kind will only become more important to those born after them.

Sarah Irving is author of a biography of Leila Khaled and of the Bradt Guide to Palestine and co-editor of A Bird is not a Stone.