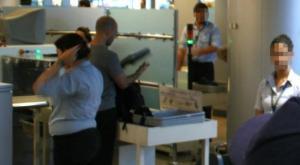 The Legal Center for Arab Minority Rights in Israel sent a letter on 16 August 2016 to Israeli Attorney General Avichai Mandelblit and Israel Airports Authority (IAA) Director General Yaakov Ganot calling on them to halt the illegal practices of strip searching and forcing security escorts on Arab passengers in the airport.

For years, Israeli airlines’ security personnel have made a practice of frequently humiliating Arab passengers, requiring strip searches during check-in and security escorts throughout airport facilities until passengers board their flight.

Adalah Attorney Fady Khoury, in his letter to Mandelblit and Ganot, argued that: "It is a core principle of administrative law that no administrative body has the authority to act in any manner but in accordance with the law, and without such authority they are not authorized to act."

In the context of pre-boarding security checks, Attorney Khoury contends that: "The Flight Law (Security in Civil Aviation), 1977, which deals with the security of flights and passengers and includes a list of authorized acts that may be employed in order to fulfill the purpose of the law, does not authorize Israeli airline security personnel to ask passengers to strip naked and to conduct searches or to escort them to the boarding gates."

Adalah emphasizes that, despite the humiliating nature of these practices and the fact that they are conducted with absolutely no legal authority, it is highly unlikely that Palestinian Arab citizens of Israel subject to these practices are able to refuse the demands of Israeli airport security personnel and still be able to travel.

"The ability of an individual private citizen to stand up to such practices is limited, and that is due both to the mistaken assumption on the part of the citizen that these practices have a legal basis and justification, as well as to the declared consequences of refusing to comply, such as being forbidden to board one's flight. In most cases, therefore, [the passenger's] consent to a strip search as part of a security check or submitting to the demand to be escorted by security personnel through the airport is consent that is obtained under duress."

The IAA, in a 24 August 2016 response to Adalah's letter, firmly rejected "any attempt to claim that, during the course of security procedures at Ben-Gurion Airport, there are employed any improper practices including stripping passengers and/or obligating them to be escorted by security guards following the conclusion of the security procedures they are required to undergo."

Attorney Khoury replied that, "the Israel Airports Authority is denying the multiple accounts by individuals testifying to use of these practices – including stripping Arab passengers and escorting them to their planes – by its security personnel, and also chooses to ignore the central charge in our letter which holds that these practices lack all legal basis."

Countless Palestinian Arab citizens of Israel have already undergone checks involving demands to strip and to walk with security escorts through the airport, and authorities are obligated to compensate these passengers for their humiliation.

"The illegality and unconstitutionality of these practices, concurrent with the illegal threats aimed at passengers who refuse to consent to the demands of security personnel seeking to employ these practices to prevent them from boarding flights – as well as the actual prevention of passengers from boarding flights – constitute a callous violation of passengers' rights and require the establishment of a mechanism to allow fair and just compensation for cases in which such violations have happened in the past."

Adalah demands that the Attorney General and the head of the Israel Airports Authority:

1) direct airport security personnel to act only in strict accordance with their legal authority;
2) halt all practices in which passengers are required to strip or be escorted through the airport by security personnel; and
3) establish a mechanism allowing fair and just compensation for those harmed by these illegal practices.

Adalah will continue to track the situation and its handling by the Attorney General and the IAA.