August 2016: A particularly discouraging month for media freedoms in Palestine 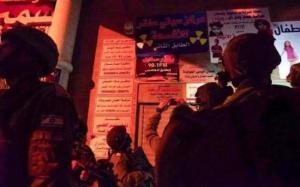 August witnessed the highest amount of violations against media freedoms in Palestine since the beginning of 2016, including a relatively large number of grave assaults against journalists and their ability to fulfill their mission in the occupied nation.

In March 2016, the Palestinian Center for Developments and Media Freedoms (MADA) monitered 40 violations, the highest number in 2016 so far, but August has exceeded it to record a total number of 41 violations.

Israeli violations monitored during August were the highest not only in terms of number, but also in nature.

On top of all Israeli violations, IOF shut down “Al Sanabel” local radio station after raiding its headquarters, destroying and confiscating broadcasting equipment and other properties, and arreseting five of its staff. They also stormed the Babel printing house in Halhoul (north of Hebron) searching through and confiscating some of its equipment. They also extended the administrative detention of journalist Omar Nazzal, member of the general secretariat of the Palestinian Journalists' Syndicate, and they sentenced Hazem Imad Naser, Trans-Media and Al Najah Channel cameraman to 8 months of actual imprisonment and a bail of 3000 NIS (880$). Journalist Raghdah Nouraldeen Etmah was injured and suffered burns on her legs when a stun grenade shot by one of the IOF's soldiers hit her while she was covering a demonstration in front of the Ofer detention center near Ramallah.

Following the shutdown of Al Sanabel radio station, the number of media institutions closed by the IOF rose to three since the beginning of 2016, and six since October 2015, a trend which exposes an Israeli policy that is escalating on a fast pace targeting media outlets by undermining their ability to work. Such grave breaches affects many media workers, for example 15 employees worked at Al Sanabel Radio. Of course, such attacks also violate the Palestinian people's right to know.

On 3 August 2016, in an unprecedented move, the IOF deliberately detained Raya FM photographer Shadi Hatem Karakrah and took him as hostage to intimidate other journalists planning to cover demonstrations in front of the Ofer detention center.

A total of 15 Palestinian violations against media freedoms were recorded in August (6 in Gaza Strip and 9 in West Bank) which indicates an increase from the previous month July.

Among the most prominent Palestinian violations that were monitored by MADA was the arrest of freelance journalist Ragheed Mohammad Tubbsieh for 18 days in Qalqilieh by the security services. Palestine's intelligence department also arrested Birzeit University media student Osama Fakhoury while he was covering scenes in Al Bireh City for the Aneen AlQayd network, for seven days. They withheld the return of confiscated photographic equipment until after an investigation was held. Ali Samoudi, an Al Quds reporter and photographer for Reuters in Jenin, had his car burned down by unknown assailants.

In Gaza Strip, the Ministry of Health issued a circular directed to the departments of public relations and media in hospitals to prevent from dealing with media outlets regarding the disclosure of information in several issues, one of its clauses stipulates the prevention of Al- Monitor reporter and freelance journalist in Al-Araby TV Mohammed Ahmed Othman from enter any hospital, because of a television report that was conducted by Othman on health sector during the month of April in which he addressed the subject on drugs of unknown origin in Gaza, and the lack of active ingredient in the composition. Journalist Hajar Mohammad Hard, who works with Arab TV, was accused on five charges related to preparing a television report on corruption in the health transfer system.

To read about the violations in detail, continue reading the report on MADA's site: